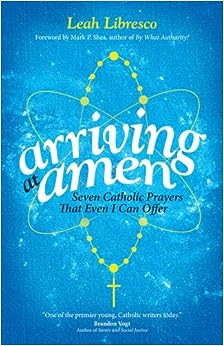 New Catholic author Leah Libresco's book, "Arriving at Amen," is an unusual and lively read. Libresco's talent is to see the handiwork of God within Math, Science, Literature, and Modern Day Musicals. I find her book an especially useful tool for those of us with an established Catholic Identity and a routine prayer life.

Libresco's short, clear, and creative metaphors about prayer and the spiritual life really stuck with me throughout the day. I don't think I'll forget the her image of Morning and Evening Prayer being similar to an open and closed parenthesis inside a computer program. God designed me to need both parts to run my day well!

Rather than continue to talk about her unusual book, I'd rather show you her talented writing in person. Here is a quote regarding the universal sacrifice of the Mass.

"Imagine that wherever you walked, you traced out your path behind you, maybe with ink, maybe with string. There would be some places where the only evidence of your passing was a single, lonely line, but other locations (the threshold of your front door, perhaps) would show a thick mass of overlaid lines. Every point where lines cross would be a location that you occupied more than once. The times at which you stood there may have varied, but the position would remain the same..."

"I thought of the sacrifice of the Mass as being an example of the same kind of singularity. Throughout history, wherever they were in space and time, Catholics have continually doubled back to intersect in this one space. . . I might turn up for a different Mass ... but in the long chain of coordinates that describe me, there's one variable that remains absolutely the same at every Mass. ... I'm always in the exact same position with respect to Christ's sacrifice regardless of whether I'm in the same location in space and time (x,y,t) as his Crucifixion." (pg. 118-120).

Libresco has a rare gift to write about the deep mysteries of prayer with clarity and humor. I hope we can enjoy many more religious books from her in the future!
Posted by Unknown at 10:23 PM

What is a Third Order Carmelite?

A Third Order Discalced Carmelite is a person who responds to an invitation from God to live a life of contemplative prayer within the modern world.

Prayer to Saint Teresa of Avila

Teach us to pray with you with all our hearts:
"I am yours Lord.
I was born for you.
What do you want of me?"

I love silence. I love calmness. I like to avoid all inter-comment box drama. If one of my posts touched your heart, I'm happy to respond to you in an one-on-one manner. I answer all emails sent to abigail.b.benjamin@gmail.com.